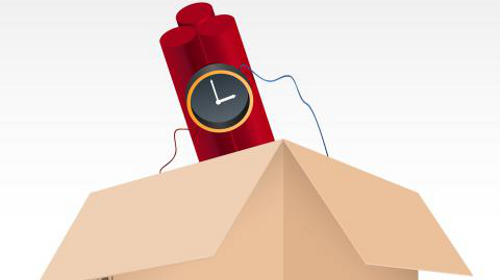 The attempted attack on Josef Ackermann is strong confirmation: letter and parcel bombs are a constant threat nowadays. The latest letter bomb found at Deutsche Bank and the explosion of a parcel in Rome make this very clear. It is evident that the systems commonly used are not effective enough to guarantee greater safety in postal deliveries. It is therefore essential that mail checking is improved – without having to sacrifice privacy. Metrology experts from Fraunhofer IPM are currently co-operating with Hübner GmbH, Kassel, and IANUS Simulation GmbH, Dortmund, to find a solution based on “terahertz letter scanners”.

Terahertz letter scanners operate using terahertz waves, that are harmless to human beings. In contrast to X-ray letter scanners, they can therefore be used practically anywhere, such as in postal logistics, in prisons, at public authorities or at the homes of endangered private individuals. X-ray scanners of the kind that are familiar to some of us from airports require considerably more effort and expense, because – for example – protection has to be provided against the radiation emitted. Apart from this, X-ray scanners are not in a position to identify explosives – unlike terahertz waves, which make an analysis of the chemical content of the letters.

The experts are convinced that widespread use of terahertz letter scanners in the postal logistics chain will enable endangered persons to be warned about letter or parcel bombs in good time. Suspicious mail can be checked on the spot and dangerous contents can be identified. Privacy is maintained as a result.

Some background information. The terahertz range is a section of the electromagnetic spectrum that has not been used much up to now. It is located between microwaves and infrared light. For a long time, scientists talked about the terahertz gap, because there were no practical sources until the 1990s. Tremendous progress has, however, been made in recent years. The systems developed by Fraunhofer IPM are particularly compact, flexible and rugged. Terahertz waves penetrate paper, cardboard and plastic. Their special advantage: the molecules present have a definite chemical fingerprint in the terahertz range, so that it is possible not just to screen mail but also and above all to make a chemical analysis of the contents. It remains to be seen, however, when this kind of security technology will be introduced in letter and parcel distribution facilities. Irrespective of this: terahertz technology has a bright future thanks to its special properties. GD