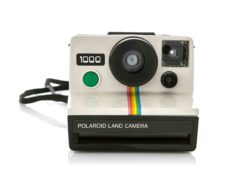 "With automatic exposure and customisable lens, every snapshot is now a hit! Thanks to stylish colours and customisable design, it enhances the look and becomes a cool accessory." With these and similar words, a photo technology is marketed that is decades old but now fully in vogue again: the instant camera. The first of its kind was sold in the USA on 26 November 1948.

It comes across as an anachronism in our thoroughly digitalised It comes across as an anachronism in our thoroughly digitalised digitalised time and yet it is still very much in vogue, not only putting people in a good mood at birthday parties and wedding receptions. We are talking about the instant camera. This is a camera that, immediately after pressing the shutter release, develops and fixes the photographed motif on a film consisting of paper, polymer and chemicals and prints it out as a finished picture; depending on the photo paper used, photos are possible in black and white or colour. The name "Polaroid" is synonymous with the underlying technology, referring on the one hand to a physical phenomenon and on the other to the company of the same name owned by the physicist Edwin Herbert Land (1909-1991), born in Bridgeport in the US state of Connecticut, and his invention.

Land had founded his company, the "Polaroid Corporation", in 1937 with the aim of producing and selling flat, film-like polarisation filters made of plastic - so-called Polaroid filters; the name "Polaroid" can thus be traced back to the term "polarisers". He had received the patent for it eight years earlier. To put it simply, the task of the polarising filter is to superimpose and bundle light waves of the same oscillation plane and thus prevent diffuse light scattering. Instead of using single crystals for this purpose, as some people may still remember from their physics lessons, Land used plastic foils into which he incorporated tiny, rectified splinters of suitable crystals.

Principle and mode of operation of a polarisation filter: superimposition and bundling of light waves of the same oscillation plane. Source: Wikipedia

Lang made his first polarising film from cellulose acetate, a thermoplastic obtained chemically from cotton, i.e. which can be deformed by applying heat, into which he incorporated tiny light-absorbing and polarising splinters of an iodine-containing crystal (herapathite)). Later, Land used colourless films made of polyvinyl alcohol (PVAL or PVOH), also a thermoplastic. The Tüffler achieved directional polarisation by first heating the film and stretching it in a certain direction, which led to a parallel alignment of the long-chain polymers. Iodine crystallites were introduced into the film as a polarising element, which attached themselves to the molecules of the polymer and thus also formed long (electrically conductive) chains.

Land's sheet-like polarisation filters based on plastic had its advantages; not least, they were lighter in weight than glass, for example, and thus also cheaper. And the demand for its development was high, and not only in terms of its use in sunglasses. In the years after the Second World War, when the demand for polarising filters continued to grow, Land finally turned his idea of an instant camera into reality. According to legend, the starting point for this idea was his daughter's question during a holiday in 1943 as to why one had to wait so long before being able to pick up a photo that one had taken. His Polaroid ultimately fulfilled this wish within a minute. With the instant cameras, the inventor's company became a billion-dollar global brand with up to 20,000 employees, writes journalist Christoph Gunkel in Spiegel Geschichte.

Land unveiled his finished invention in 1947 at the Optical Society of America by taking a photo of himself and revealing it to the audience after just one minute. Land's first camera, the Model 95, was available in the US on 26 November 1948 and sold out immediately.

The Polaroid company continued to produce new cameras and films, including those for X-ray photography in 1951, until February 2008: declining sales due to the booming digital camera market brought about the end. One was inclined to believe that the Polaroid camera, this once revolutionary invention, was obsolete - until a few years ago when instant photography was revived and is still popular. It's not without reason that they say: there's life in the old dog yet.