Back to nature: Film coatings made from whey -- K Trade Fair
close
back
Advertisement

Back to nature: Film coatings made from whey 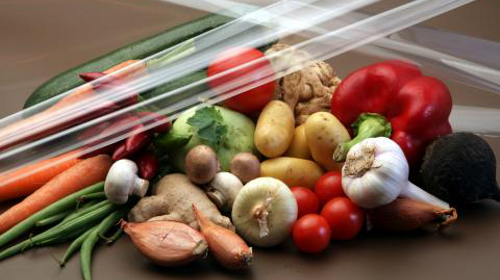 Convenience foods are growing in popularity, and the food they contain is usually protected by films based on petrochemicals. Now researchers have not only developed a biomaterial from whey protein, they have also come up with a commercially viable method of producing multifunctional films on an industrial scale.

From pre-packed Camembert to shrink-wrapped meat loaf – choosing the right packaging is a key issue in the food industry. Companies need to protect food products from oxygen, moisture and chemical and biological contamination while keeping them fresh for as long as possible. Transparent multilayer films, in which each layer offers specific benefits, are frequently used to protect food from contamination. To minimize the amount of oxygen that penetrates the packaging, companies typically use expensive, petrochemical-based polymers such as ethylene vinyl alcohol (EVOH) copolymers as barrier materials. The German Society for Packaging Market Research (Gesellschaft für Verpackungsmarktforschung mbH) estimates that more than 640 square kilometers of composite materials employing EVOH as an oxygen barrier layer will be produced and used in Germany in 2014 – enough to completely cover Lake Constance. There is therefore a strong impetus to develop a sustainable packaging material which is both economical to produce and environmentally friendly. Researchers working on the EU’s “Wheylayer” project have been using whey protein instead of petrochemical-based polymers (www.wheylayer.eu). The natural ingredients in the whey extend the shelf life of food products, and the whey protein layer is biodegradable. The results of the research are promising. “We’ve managed to develop a whey protein formulation that can be used as the raw material for a film barrier layer. And we have also developed an economically viable process which can be used to produce the multifunctional films on an industrial scale,” says Markus Schmid from the Fraunhofer Institute for Process Engineering and Packaging IVV in Freising.

But how is it even possible to make a barrier layer from whey? The researchers from the IVV began by purifying sweet whey and sour whey and producing high purity whey protein isolates. They tested a range of different modification methods in order to obtain suitable proteins with outstanding film-forming properties. To enable these proteins to withstand the mechanical loads involved, they were subsequently mixed with differing concentrations of various softeners and other additives, which were also biobased. “All these additives are approved substances,” says Schmid. The search for the perfect formula was a tricky process for the Freising-based researchers. For example, use too many softeners and the barrier effect against water vapor and oxygen decreases, which means that the food is no longer adequately protected. In the end, the researchers not only found the optimum formula, but also came up with a suitable, economically viable and industrial-scale method of applying whey protein coatings to plastic films and combining these with other films using different technologies. The overall process produces multilayer structures with barrier functions which can be used to produce flexible, transparent food packaging materials. “Our work at the IVV to manufacture a multilayer film of this kind using a roll-to-roll method is a world’s first,” Schmid notes. Companies that choose to make the switch to whey proteins in the future will only need to make minor modifications to their plants. The researchers and their project partners have already applied for a patent on this new technology.

The IVV researchers are so convinced of whey proteins’ future potential as an alternative packaging material that they have initiated their own project which goes one step further. According to a survey carried out by the German Society for Packaging Market Research, there is not only an increasing demand for composite films, but also an increasing need for thermoformable composites. Growing demand for prepared products in trays is expected to increase the volume of these composites from 76,497 tons in 2009 to 93,158 tons in 2014. The researchers are working hard to replace EVOH in thermoform composites with a barrier layer based on whey protein. This additional application for whey protein would likewise conserve resources and reduce the emission of carbon dioxide into the atmosphere.