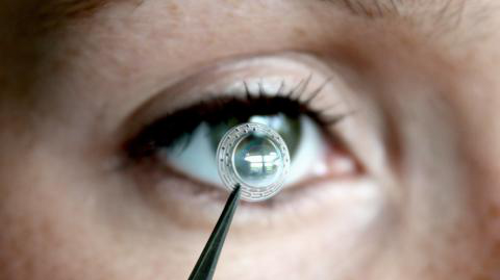 ArtCornea is easy to implant. This artificial cornea does not trigger any immune reactions. (Source: IPA)

Our eyes are our window to the world. Thousands of people have lost their eyesight due to damages to the cornea, such as trauma, absent limbal stem cells or diseases. Transplantation of a donor cornea is the therapy of choice for a great number of those patients. Let alone the issue of scarce donor material, a sub-group of patients do not tolerate transplanted corneas, necessitating the employment of an alternative means of restoring eye sight. In Germany alone, around 7,000 patients are waiting to be treated. In close cooperation with the Aachen Centre of Technology Transfer, Dr. Storsberg and his team from the Fraunhofer Institute for Applied Polymer research IAP in Potsdam, are attempting to improve the situation by developing an artificial cornea. Scientific partners in the “ART CORNEA” project include the Martin Luther University of Halle-Wittenberg, ACTO e. V. and the Ophthalmic Clinic Cologne-Merheim.

“We are in the process of developing two different types of artificial corneas. One of them can be used as an alternative to a donor cornea in cases where the patient would not tolerate a donor cornea, let alone the issue of donor material shortage,” says IAP project manager Dr. Joachim Storsberg. The scientist has considerable expertise in developing and testing of next-generation biomaterials. Between 2005 and 2009 he collaborated with interdisciplinary teams and private companies to successfully develop an artificial cornea specifically for patients whose cornea had become clouded – a condition that is extremely difficult to treat. Such patients are unable to accept a donor cornea either due to their illness or because they have already been through several unsuccessful transplantation attempts. Dr. Storsberg was awarded the Josef-von-Fraunhofer Prize 2010 for this achievement. “A great many patients suffering from a range of conditions will be able to benefit from our new implant, which we’ve named ArtCornea", predicts Storsberg.

ArtCornea is based on a polymer with high water-absorbent properties. Dr. Storsberg and his team have added a new surface coating to ensure anchorage in host tissue and functionality of the optic. The haptic edge was chemically altered to encourage local cell growth. These cells graft to the surrounding human tissue, which is essential for anchorage of the device in the host tissue. The researchers aimed to enlarge the optical surface area of the implant in order to improve light penetration beyond what had previously been possible – a tall order. “Once ArtCornea is in place, it is hardly visible, except perhaps for a few stitches. It’s also easy to implant and doesn’t provoke any immune response,” says Storsberg, highlighting the merits of this new development.

The specialists have also managed to make a chemically and biologically inert base material biologically compatible for the second artificial cornea, ACTO-TexKpro. Dr. Storsberg achieved this by selectively altering the base material, polyvinylidene difluoride, by coating the fluoride synthetic tissue with a reactive molecule. This allows the patient’s cornea to bond together naturally with the edge of the implant, while the implant’s inner optics, made of silicon, remain free of cells and clear. The ACTO-TexKpro is particularly suitable as a preliminary treatment, for instance if the cornea has been destroyed as a consequence of chronic inflammation, a serious accident, corrosion or burns.

The experiments were carried out in collaboration with Dr. Norbert Nass and Dr. Saadettin Sel, Senior consultant ophthalmologist at Martin-Luther-University Halle-Wittenberg. How well TexKpro and ArtCornea are accepted by clinicians as an additional tool at their disposal was first tested by the doctors in the laboratory thereafter in vivo in several rabbits. After a six month healing process, the implanted prostheses were accepted by the rabbits without irritation, clearly and securely anchored within the eye. Tests carried out following the operation showed that the animals tolerated the artificial cornea well. Prof. Dr. Norbert Schrage will take charge of clinical trials that will soon commence at the Eye Clinic Cologne-Merheim. It is likely that the positive results of tests carried out thus far will be confirmed, and the co-operation partners rate the chances of success very highly. Their optimism is well founded: As early as 2009, several Ultima-Ratio patients received implants of a Kerato prosthesis specially developed for them because they had previously rejected human corneas. These patients have not suffered any complications and are still wearing their artificial corneas today.