Apropos K: life and death of Wallace Hume Carothers, the inventor of nylon and the discoverer of neoprene -- K Trade Fair
close
back
Advertisement

Life and death of Wallace Hume Carothers, the inventor of nylon and the discoverer of neoprene 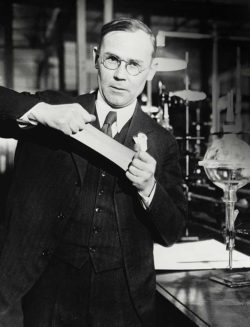 He would be included in any list of the names of significant polymer chemistry scientists: Wallace Hume Carothers, the discoverer of neoprene and the inventor of nylon. But Wallace he did not see himself in this manner…

Wallace Hume Carothers was born in Burlington in the US state of Iowa on 27. April 1896 as the oldest of four children. After he finished school, he qualified as an accountant, but then studied natural sciences (chemistry in particular) from 1915 onwards. Carothers proved to be such an excellent student that he took over teaching his professor’s courses – while still an undergraduate – when the professor became a soldier in the First World War. Carothers obtained his bachelor’s degree in 1920 and his master’s degree at the University of Illinois in 1921. Following a short stint as a lecturer at the University of South Dakota, he returned to the University of Illinois, where he obtained a doctorate in 1924. In 1926, Carothers became a lecturer at Harvard University. He left there only three years later, however, in order to work for DuPont as Research Manager in the development of synthetic materials and plastics. Carothers carried out a number of pioneering developments for the company that are still having an impact today: for example, he and his team discovered neoprene – the first synthetic rubber – in 1930. The next polymer sensation followed five years later, when Carothers experimented with polyester fibres and polyamide and invented nylon – the material that delighted women for a long period of time.

Wallace Hume Carothers neither knew what name his fibre was given nor did he experience its triumphal success. The scientist suffered from chronic depression and committed suicide in a hotel room in Philadelphia on 29. April 1937, two days after his 41st birthday. During the interview he had for the job at DuPont, the brilliant scientist had already warned the company that he was afflicted by “a recurring neurotic impairment of my productivity”. Years before he took his own life, he had shown Julian Hill, a member of his staff, a capsule of potassium cyanide, which he carried around with himself attached to a watch chain. Carothers’ melancholically morbid character was obvious for all to see, but no-one seriously believed that he would consider suicide, because he was at the height of his creative powers and personal fame. On 30. April 1936, almost exactly one year before his suicide, Carothers had been appointed a member of the prestigious National Academy of Sciences; no scientist who carried out research for industry had ever received this honour before.

Carothers was not the type of person to sit back and enjoy his success, however, particularly in view of the fact that he thought that he was already past his best: he is supposed to have told a friend that synthetic rubber and nylon were enough achievements for one person’s entire life. It is also reported that he was plagued by the fear that he would never have another good idea ever again.