A polymer 'love hormone' sensor for the early detection of autism 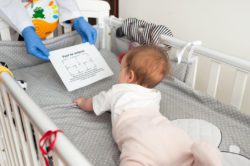 Small amounts of oxytocin, one of the biomarkers of autism, can be detected by a new chemical sensor, designed and fabricated at the Institute of Physical Chemistry of the Polish Academy of Sciences in Warsaw. Credit: IPC PAS, Grzegorz Krzyzewski

Is it going to be possible to detect features of autism at birth? At the Institute of Physical Chemistry of the Polish Academy of Sciences in Warsaw a sensor has come into being that means this may become a reality. The main recognition component of the new device is a polymer layer with a carefully designed structure. It recognizes molecules of oxytocin, a compound considered to be one of the biomarkers of autism.

Molecules of many different chemical compounds circulate in human blood. One of them is oxytocin, a compound more commonly known as the 'love hormone'. Distinct changes in its blood concentration suggest the patient may potentially be predisposed to autism. It will be possible to detect these changes using a new chemical sensor, designed and fabricated at the Institute of Physical Chemistry of the Polish Academy of Sciences (IPC PAS) in Warsaw, which selectively recognizes even small amounts of oxytocin. A description of work on the device, funded by the Iuventus Plus grant from the Ministry of Science and Higher Education of Poland, has just been published in Biosensors and Bioelectronics, a scientific journal of high reputation.

In medicine, there are occasional breakthroughs that result in a qualitative improvement in the health of entire populations. In the 20th century, such moments include the discovery of antibiotics or the spread of vaccination. Today, it seems that in the near future a revolution on a similar scale will come about thanks to new diagnostic devices that are sensitive, accurate, fast, and above all small and very cheap. Available at all times and to everybody - perhaps even wearable or incorporated in everyday items? - these instruments could detect diseases at very early stages of development, thereby contributing to a dramatic increase in treatment efficacy. The key element of this type of innovative diagnostic instrument must be reliable sensors capable of reacting to the presence of even a small number of molecules of highly discriminative with respect to selected chemical compounds.

"In the devices developed in our research team, the role of recognizing the sought after compounds is played by carefully fabricated and equally carefully produced polymer layers. The main idea here is simple, i.e., for each compound to be recognized we try to build a layer of a polymer with cavities - molecular voids - that are as best as possible suited to the shape as well as physical and chemical properties of the molecules of the chemical compound that we want to recognize in the sensor's surroundings," says Prof. Wlodzimierz Kutner (IPC PAS).

'Stamping' the shape and properties of molecules of the selected compound in the polymer matrix is a technique known as molecular imprinting. Functional monomers are introduced into a solution containing the molecules that are to be detected. They attach to characteristic binding sites on the molecules to be imprinted. A cross-linking monomer is then introduced which rapidly binds to the functional monomers. The target recognition layer is formed after polymerization of the cross-linking monomer, and then rinsing out from the structure thus formed the molecules of the compound selected for detection.

Prof. Kutner's team has already developed many polymer layers that selectively react to even low concentrations of important chemicals, including melamine, nicotine, albumin and neopterin (one of the biomarkers of cancer). Oxytocin has just joined this group.

"It's one thing to capture oxytocin molecules in a polymer layer, but quite another to read the information that the molecular cavities have been filled," notes Dr. Zofia Iskierko from Prof. Kutner's team and explains: "For us, the signal of the presence of oxytocin in the recognition layer is a change in electrical capacitance. That is why we produce these layers on small gold electrodes. We insert the electrodes into a tube through which a solution of blood (in our tests artificial blood) flows. The oxytocin molecules sink into the cavities of the polymer layer, thus changing the electrical capacitance of the measuring system."

In experimental tests, it turned out that the new sensor detects micromolar concentrations of oxytocin and reacts to its presence even when it is surrounded by molecules of a very similar structure. Professor Kutner's team is working on increasing the sensitivity of the sensor to a level that allows detection of nanomolar concentrations. The aim here is to achieve a sensitivity that allows a single, small drop of blood to be used to carry out a variety of diagnostic tests. The experiments performed at the IPC PAS labs also showed that the polymer recognition layer is relatively durable and allows multiple measurement repetitions without detriment to their sensitivity and selectivity.

Changes in blood oxytocin concentration alone do not make it clear whether a person is predisposed to autism. Before the diagnosis is made, the concentration of at least a few other substances (biomarkers) characteristically associated with this disease should be checked.

"Our oxytocin chemical sensor is really only a first step towards building a more advanced medical device that diagnoses a predisposition to autism. For some time, we have been working on polymer layers that respond to the presence of two other compounds associated with autism, namely, melatonin (which should not be confused with melamine) and gamma-aminobutyric acid," stresses the leader of the research project Dr. Piyush S. Sharma (IPC PAS).

Institute of Physical Chemistry of the Polish Academy of Science