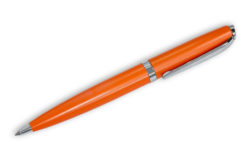 On 29. October 1945, the New York department store Gimble launched a completely new writing implement on the market that has in the meantime established itself as probably the most significant product of its kind. What we are talking about here is the ballpoint pen, which was developed because its inventor was interested in writing that dried quickly and did not smear. As it turned out, what he came up with has subsequently become the utensil of choice on pretty much every desk anywhere – at sea, on land, in the air and even in outer space.

The ballpoint pen was developed by the Hungarian László József Bíró. His aim was to produce a writing implement with which ink dries quickly and does not smear after it is applied – in contrast to fountain pens – and with which the writing cannot be erased or removed simply by other means – in contrast to pencils. Bíró found his inspiration for the development of the ballpoint pen (the first of which was called a Go-Pen, which is still the word popularly used for a ballpoint pen in Hungary to this day) in newspaper printing plants, where printing ink is transferred to paper via rollers. Put in simple terms, the inventor filled a coloured paste in a hollow cylinder that was closed at its open end with a rotating ball. When this ball is rolled on a sheet of paper, it leaves a moist ink mark at the point where it comes into contact with the paper – like a marble on a dry surface that has rolled through a puddle beforehand. The moisture in the ballpoint pen ink – a solvent – evaporates, so that what is left on the paper is the solid dye that has been applied to it. This is, in a nutshell, the technical background to the invention of the ballpoint pen, for which Bíró filed a patent application in Hungary in 1938. The inventor was granted the patent for the ballpoint pen in Argentina, to which the Jewish-born Bíró had fled with a brief stop in France to avoid Nazi persecution, in 1943, and in the United States of America in 1948.

However, the ballpoint pen did not merely have the advantage that its ink paste dried quickly and remained indelible – and thus forgery-proof – on paper. Its design had another benefit that was very useful to a certain target group, as the British accountant Henry George Martin realised. He bought the patent from Bíró and started to produce ballpoint pens in Southern England. In the early days, Martin sold 30,000 of the writing implements – which were considered forgery-proof – to the Royal Air Force. Because the latter had found out that ballpoint pens continued to work even when there were major fluctuations in air pressure of the kind encountered when flying – in contrast to fountain pens.

Bíró’s ballpoint pen was given a major boost in the USA by the fountain pen manufacturer Milton Reynolds, a textbook example of an entrepreneur, who launched the Go-Pen on the US market at the New York department store Gimble under the name “Reynolds Rocket”. 10,000 Reynolds Rockets were sold at a price of USD 12.50 (the equivalent of about EUR 160.00) on the first day alone.

The US aerospace agency NASA, finally, was also looking for a writing implement that worked not only underwater but also in outer space, where there is no gravity. The ballpoint pen proved to be the solution here too, albeit in a modified form. The ink or rather the ink container had to be pressurised so that the ink was able to flow without the help of gravity. Paul Fischer’s US company succeeded in solving this problem in 1967. Various Bíró-based “space pens” are now in existence, following the investment of millions of dollars in their development.

In view of this special feature, space pens are not designed for the general market, which is dominated by classic ballpoint pens, the container of which is mainly made of plastic these days and is still used successfully on a large scale to communicate advertising messages – 74 years after the first patent was granted.

László József Bíró lived to experience this development himself. According to media reports, he died in a hospital in the Argentinian capital of Buenos Aires on Thursday, 24. October 1985, at the age of 86 following a brief but serious illness. (Lennart Wehmeier/Guido Deußing)