110 years ago: windscreen wiper patent for Prince Henry of Prussia 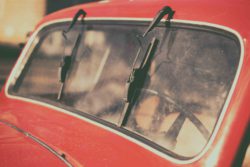 If it did not exist already, it would need to be invented – the windscreen wiper. When cars still had to manage without windscreen wipers, frustrated drivers all over the world racked their brains trying to come up with a way to make it easier to see the road ahead in rainy weather and when the windscreen was dirty. So plenty of different people can claim to have invented the windscreen wiper. The first patent in Germany was granted to Prince Henry of Prussia, the brother of the last German emperor, on 24. March 1908.

Necessity is the mother of invention – and provides inspiration not only to those whose job it is to find ways to make progress. Amateurs tackle everyday problems and difficulties too – and are successful at finding solutions to them. Hardly any innovation illustrates this better than the windscreen wiper, because its inventors include a US farmer, an English press photographer, a Hawaiian dentist and a Canadian actress. 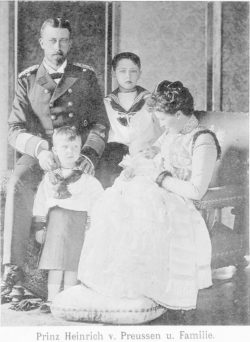 Grand Admiral, car enthusiast and pilot: Prince Albert Wilhelm Henry (in the picture [source unkown]with his wife and his sons) of Prussia (1862-1929) was in his element at sea, on land and up in the air.

Quite apart from a member of the German aristocracy: it was Prince Henry of Prussia (1862-1929) who was granted the first German patent about the windscreen wiper (DRP 204343) on 24. March 1908. The brother of the German Emperor Wilhelm II and grandson of the British Queen Victoria was a passionate car enthusiast. With the Prince Henry Tours named after him – long-distance races 2,000 km long that were held in 1908, 1909 and 1910 and were designed to test the reliability of the cars participating – he made a major contribution to motor racing. Before this, he was involved in the transformation of the German Automobile Club into the Imperial Automobile Club (“K.A.C.”). In the same year, he had the bright idea for a “window cleaner for the front windscreen”, consisting of “a wiping ruler in the form of a cantilever”, as it said in the patent.

To be exact, what Henry’s invention consisted of was “that a window cleaner is attached to the side of the freestanding window and can be moved up and down by the car driver directly at any time, i.e. without any special mechanisms, as a result of which dust, dirt, raindrops, snowflakes etc. that may collect on the outside and possibly also the inside of the window can be wiped off and removed”. According to the Prince, what he wanted to achieve with his invention was to remedy a “grievance” that had bothered him for a long time, i.e. that although the “framed glass window” fitted in front of the “driver’s seat” protected the car driver from dust and road dirt, it “very soon became impossible to see through” because of deposits on it. The problem was similar where precipitation was concerned: “If one drives […] at night along roads illuminated by lamps or during the day with comparatively good lights or even in sunlight, every drop of rain acts like a lens, by which the light is refracted and dazzles the car driver’s eyes completely, because the numerous raindrops then look […] like twinkling stars and make it almost impossible to see the road ahead. Since the car driver is therefore unable […] to watch the road in front of him properly, this reduces safety when driving the motor vehicle and thus endangers the lives of all the passengers in it as well as everyone crossing the road.”

Drawing of the “Window cleaner for the front windscreen of motor vehicles” invented by Prince Henry of Prussia, that was included with the Patent No. 204343 granted by the Imperial Patent Office on 24. March 1908

Since it was operated manually, the windscreen wiper that Henry came up with was not a tremendous success. It was to take the whole of the 20th century and the innovative skills of engineers and experienced technical experts to complete the development of windscreen wipers from the initial, manually operated ones to the electronically operated wiper blades with sensors that are available today. While Prince Henry’s patent was not therefore the final stage in the history of the windscreen wiper, it was not the first one either: a “Window-Clearing Apparatus” meant for locomotives, that was devised by David G. Richards from Cleveland/Ohio and was patented in the USA (No. 387,919) on 14. August 1888, must be considered an early predecessor.

Whereas Prince Henry’s “wiping ruler” consisted of “flexible fabric”, Richards used a strip of rubber to clear the window – a material, as we now know, that was to establish itself as the material of choice for wiper blades. Natural rubber was initially used in the first few decades thanks to its tear strength and elasticity even at low temperatures. Its tendency to age quickly and thus require frequent replacement was a disadvantage, however, so that natural rubber was replaced by synthetic chloroprene rubber, which was more hard-wearing and more resistant to, for example, ozone, UV radiation and chemicals.

Back to the early days, however: Richards was followed in the list of inventors of the windscreen wiper by Jacob Kirchmer jr. (1876-1925) from Cincinnati/Ohio, whose “Window Cleaner” was patented in the USA on 5. July 1898 (No. 606,995). Kirchmer’s windscreen wiper was meant for railway trains and ships, as was the “Locomotive Cab Window Cleaner” developed by Robert A. Douglass from Truro/Canada, which was granted US Patent No. 762,889 on 21. June 1904.

It takes at least half a year for windscreen wipers made from chloroprene rubber to wear out. During this time, they complete more than half a million wiping cycles, ... Image: istock/prill

Before this, other inventors had already come up with concepts for cars too: in Great Britain, the engineer James Henry Apjohn (1845-1914), who was born in Ireland, presented a manually operated wiper arm fitted with brushes that moved vertically. As an “Apparatus for Cleaning Carriage, Motor Car and other Windows”, it was granted the British Patent No. 190321790 on 9. October 1903. Only one month later, on 10. November 1903, a similar advance was made in the USA too: Mary Anderson (1866-1953), a farmer from Birmingham/Alabama, developed an apparatus that some historians consider to be “the first viable windscreen wiper in the world”. It consisted of a lever fitted near the steering wheel, with which a spring-loaded arm with a rubber blade could be set into motion on the windscreen when required before returning to its original position. It was, incidentally, possible to remove the apparatus, so that it was not there to offend the eye and spoil the view of the countryside in good weather … US patent 743,801 guaranteed Anderson property rights to her “Window-Cleaning Device” until 1920. In 1905, she offered her patent to the company Dinning & Eckenstein based in Montreal/Canada, but it was rejected because the company did not think it had any commercial value: “We do not consider it to be of such commercial value as would warrant our undertaking its sale.” In practice, many cars did not even have windscreens due to their lack of speed. In the USA, it was not therefore until 1916 that windscreen wipers started to be included as a standard feature. Business did not take off until after Anderson’s patent expired.

Another British patent was granted in April 1911. The application for it was filed by the press photographer Gladstone Adams (1880-1966) from Newcastle upon Tyne. Three years before, following the final of the English football cup in London that his club Newcastle United had lost, Adams had driven into a snowstorm in his car on the journey home from the English capital and had to stop again and again to clear snow from the windscreen by hand so that he could see properly. His experience with the snow gave Adams the idea of inventing a windscreen wiper. Nothing more than a prototype consisting of wood, wire and rubber was produced, however – it can still be seen today in the “Discovery Museum” in Newcastle.

... travel a good 800 kilometres doing so and keep a total area the size of 60 football fields free of water and dirt. Image: istock / AlexKosev

1917 represents a milestone in the ongoing development of the windscreen wiper. Ormond Edgar Wall (1876-1937), a dental surgeon from Honolulu/Hawaii, produced the first electric windscreen wiper (US Patent 1,227,100 of 22. May 1917). It was fitted in the middle of the windscreen and moved across it in a sort of semi-circle, driven by an electric motor. The Canadian actress Charlotte A. Bridgewood (1861-1929), mother of the silent film star Florence Lawrence, tried to automate / motorise the windscreen wiper too. Successfully, because her “Cleaning Device” went down in history on 6.8.1918 as US Patent 1,274,983. In the mid-1920s, Robert Bosch, a company based in Stuttgart/Germany, then presented a design in which an electric motor drove two wiper arms simultaneously and uniformly across the windscreen at the press of a button (DRP No. 472574 of 14. February 1929).

By this time at the latest, Prince Henry’s stroke of genius was outdated, but he had moved on from cars to aircraft long beforehand anyway and was the proud owner of a pilot’s licence. On 20. April 1929, Henry – a heavy smoker – died of cancer of the larynx, a fate he shared with his father, the 99-day-emperor Frederick III (1831-1888). He is still remembered to this day – not as the German inventor of the windscreen wiper, but as the creator of the Prince Henry Cap, the trademark of the Imperial Yacht Club in Kiel/Germany. Because Prince Henry was active not only on land and up in the air but also at sea – as Grand Admiral of the German Navy and Vice Admiral of the British Fleet.