“Holding your world together”: a brief history of the rubber band -- K Trade Fair
close
back
Advertisement

„Holding your world together“

A brief history of the rubber band 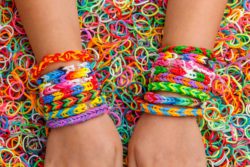 173 years ago, on 17. March 1845, the London industrialist Stephen Perry was granted the patent for the production of elastic bands from vulcanised natural rubber. Since then, he has been considered the inventor of the rubber band, although he benefitted from the work done previously by one of his compatriots. The English-speaking world still continues to dominate the headlines where rubber bands are concerned: the biggest manufacturer in the world is based in the USA. And a world record associated with rubber bands was also set in the country where opportunities are said to be unlimited.

They are used to keep bank notes, letters and newspapers together, to make bunches of herbs, to braid hair into pigtails or to tie it into ponytails. They stop underwear slipping down, make sure that jars of preserved food are given an air-tight seal and have recently found a new application as the mounting for hard drives in computer housings: rubber bands of varying length and thickness, with the basic shape of an uninterrupted ring, hold everyday things together reliably. Their versatility and ubiquity mean that they are taken for granted almost as much as natural objects that are simply there without anyone having to invent or make them. One of the reasons for this is that rubber bands have been in common use for many generations now and it is already almost 175 years since the patent for producing them was granted.
The initial patent holder was the London industrialist Stephen Perry, together with the engineer Thomas Barnabas Daft (1816-1878), who also worked in London. The British patent no. 13880 of 17. March 1845 that was granted to the two of them related to improvements to rubber bands for straps, belts and bandages as well as to the production of elastic bands. But how were the “rubber rings” produced that were unknown until then? Very simply: by slicing hollow rubber tubing into narrow strips. In the beginning they were still anything but a mass product and were used almost exclusively to hold loose sheets of paper, newspapers and other paper products together.

Perry has been forgotten almost completely in the meantime and has been overshadowed by such more well-known contemporaries as Charles Nelson Goodyear (1800-1860) and Thomas Hancock (1786-1865), the discoverers of the vulcanisation of rubber, or Charles Macintosh (1766-1843), the manufacturer of the first impermeable raincoat that was impregnated with rubber. So who was this Stephen Perry, about whom no biography has been written to this day and of whom no photos can be found – even in the World Wide Web? He was, first of all, the son of James Perry, who in 1824 founded a company in Manchester that specialised in the production of steel pens. They had a good reputation throughout Europe, so that “Perry pen” soon became the international synonym for steel pens. When James Perry died in 1843, his son Stephen took over management of the company and expanded the operations to include rubber bands after he received the above-mentioned patent. They were soon to become known as “Perry & Co’s Royal Aromatic Elastic Bands”. From now on, the company was called “Messrs. Perry and Co., Rubber Manufacturers of London” and co-operated first with Charles Macintosh & Co., Manchester, and later with William Warne & Co., Tottenham, where rubber bands were concerned.

It was no coincidence that Stephen Perry focussed on rubber, because he knew Thomas Hancock, who is now considered to be the “father of the British rubber industry”. Although Perry did not intervene in the latter’s priority dispute about vulcanisation with the American Charles Goodyear with his patent (“we make no claim to the preparation of the India rubber”), he benefitted from this dispute. Because Hancock invested so much energy and time in the controversy with Goodyear that he failed to secure other rights for himself.

In 1820, he had obtained his first rubber patent, which enabled him to incorporate fine rubber threads in textile fabrics and thus to produce the predecessors of our present-day stretch fabrics. A process that, incidentally, goes back to Johann Nepomuk Reithoffer (1781-1872), the master tailor from Moravia. Hancock then established a company in London that he called “James Lyne Hancock Ltd.” after his brother and that acted as the production facility for such products as elastic garters and rubber bands for boots. He bought the raw rubber he needed for this purpose in Brazil: big lumps, in the processing of which considerable amounts were left over that were no longer any use for the production of threads of sufficient length. In order to enable the left-over rubber to be put to a different use, Hancock shredded it in an enclosed, crank-driven, hollow cylinder – and was surprised, when he opened it, to find a single, hot ball of rubber instead of the small strips he had expected. As can be explained from what we know today, the shredding operation had shortened the long molecule chain of the rubber particles – a process that takes place with the generation of a large amount of heat and increases the plastic properties of the rubber, so that it was now much easier to shape and process, as Hancock found out. In 1821, the Briton therefore replaced the hand-operated apparatus with a capacity of barely five kilograms by a larger horse-driven kneading machine that could be heated from the inside and that he called a “masticator” (from the Latin word “masticare”, which means “to chew”). Hancock gradually increased its capacity to 90 kilograms and processed the masticated rubber into a wide variety of different products at his facility.

He started to manufacture rubber tubing and piping as early as 1822. It was not long until he had the idea of cutting them into bands and rings. Hancock was, however, unable to think of any practical use for them, particularly in view of the fact that vulcanisation was still unknown and the rubber therefore remained an extremely inconsistent material – in spite of mastication – which became hard and brittle on cold days and became very soft on warm days. So it is no surprise that Hancock did not try to market his rubber bands. What is surprising, however, is that he was not foresighted enough to secure the rights to them for the future, in the same way that he also failed to do so with the masticator – probably for secrecy reasons.

In 1845, Stephen Perry closed this gap with his patent application about elastic bands – with the crucial difference that they were in the meantime made from vulcanised rubber. So Perry, who died in 1873, really does deserve the credit for being the inventor of the rubber band, even if he – ironically enough – had obtained the material licence from Hancock.

As is generally known now, it is vulcanisation – i.e. heating with sulphur – that makes rubber more elastic and durable; a thermoplastic becomes an elastomer. What is behind this is a chemical crosslinking reaction: the linear polyisoprene chains of the natural rubber are crosslinked with each other by the addition of bridge-building sulphur, encouraged by high temperature and pressure. In order to make them particularly stretchy, most rubber bands are, incidentally, still manufactured from natural rubber, although synthetically produced rubber has been available for a long time now too, synthesised from, for example, butadiene and sodium.

It is standard procedure for rubber rings for preserved food jars to be made from vulcanised natural rubber too, so that they have tensile and tear strength properties and remain elastic for many years. The sealing of glass containers containing preserved food was invented by Rudolf Rempel (1859-1893), a chemist from Gelsenkirchen in Germany. His 1892 patent was later passed on to Johann Carl Weck (1841-1914), Rempel’s first major customer, who established the company J. Weck & Co. in Öflingen, Germany, on 1. January 1900. In 1907 the verb “einwecken” was added to the Duden German dictionary as a synonym for “to preserve”. More than 100 million rubber rings for this purpose are now sold in Germany every year.

Rubber factories that manufacture them frequently produce rubber rings for bottles too, that are used to seal flip-top closures to the tops of beer and mineral water bottles. This is another example of how the rubber ring has continued to exploit its potential since Perry’s day and has been put to further uses, e.g. to align teeth in orthodontics or to shoot balls of paper around in school.

The biggest producer in the world is now Alliance Rubber Company in the USA, which was established in 1923 in Alliance/Ohio by William Spencer (1891-1986) and used the slogan “Holding your world together” to advertise the rubber band. A second plant was added in Hot Springs/Arkansas in 1944. In 1957, Spencer patented a standardised rubber band called the “Open Ring” that he had developed. The company reports that it manufactured rubber bands with a total weight of 6.8 million kilograms in 2017. The figure was considerably higher in 1999 at 11.6 million kilograms. The biggest customer is the United States Postal Service (USPS).

The biggest rubber band ball in the world, for which Joel Waul from Lauderhill/Florida was included in the Guinness Book of Records in November 2008, was two metres high, had a circumference of 6.30 metres and weighed as much as 4,100 kilograms. He was 27 years old at the time and called the monster he created “Megaton”; it is supposed to consist of more than 700,000 intertwined rubber bands. Pretty irresponsible from both the environmental and economic points of view: Stephen Perry would certainly be astonished if he knew that we live in an age in which art for art’s sake justifies the senseless wastage of a valuable raw material.
M. Weber / G. Deussing