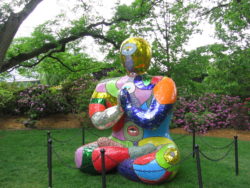 Despite all the prejudices: the chemistry between art and plastic is right! The use of synthetic materials does not make works of art “phoney” in any way. Accusing them of being artificial is wrong, because this would be based on the questionable requirement that art is supposed to be “natural”. History tells a different story: art has kept its distance from nature right from the start and has been undermining its authority step by step. Although art has superficially become more “artificial” in modern times with the introduction of plastic, this does not make it any less artistic – nature is not regaining any of the authority it has lost.

While it is often the case that art theory is still battling with the issue of artificiality, art itself – and sculpture in particular – completed the integration process long ago in practice. Plastic sculptures  experienced a veritable boom in the 1960s. Historically speaking, their history began before this, however:

As long ago as 1916, the Russian sculptor Naum Gabo (1890 – 1977) created a sculpture called Tête No. 2 (Head No. 2) from Rhodoid (cellulose acetate, mainly used for billiard balls at the time) that was influenced by the cubist movement – in Paris, the city he chose to live in as his home. Art historians consider this to be a premiere – plastic was used as a material for artistic design for the first time.

A short time later, Rhodoid was joined in the art world by celluloid, which catches fire easily, however – remember the early days of the cinema, when celluloid film went up in flames as soon as it got too hot in the projector  (Source: Hamburg Film Museum).

Polymethyl methacrylate (PMMA), better known under its trade names Plexiglas, Lucite or Perspex, became available at the end of the 1920s too. The transparency of the new material made it possible for the visual arts to express themselves in completely new ways: light oscillation, which art enthusiasts normally ignore and sometimes even find distracting, now became part of the work of art and/or dissolved boundaries where spatial depth was concerned. A development that Gabo and Antoine Pevsner (1884 – 1962) had already anticipated on 5. August 1920 in their “Realistic Manifesto”:

The two brothers declared that light and movement of it in an empty room were new sculptural tools and demanded elimination of the established materials. The manifesto marks the beginning of a tradition, a line that included László Moholy-Nagy (1895 – 1946), the constructivist who taught at Bauhaus in Weimar in the 1920s, and his „Space Modulator“ (1939) and can be traced all the way to the present (link to the chronological table) – e.g. to the German artists Adolf Luther (1912 – 1990, spherical concave mirror objects), Heinz Mack (born in 1930, luminokinetic art) or Uli Pohl (born in 1935, light sculptures made from plastic).

Plastic – ideal material for the arts

There are plenty of reasons for an artist to work with plastic and they are, first and foremost, completely pragmatic ones that have nothing to do with the effect they have and their spiritual significance. Plastic submits to practically all technical and aesthetic requirements. Its adaptability and versatility increase artistic design potential immensely and make it virtually a universal material: it is more pliable than glass, more malleable than wool and has the ability to imitate wood, stone, marble or metals exceptionally well and thus replace them. Artists frequently prefer plastic for cost reasons, on the one hand, because plastic is, after all, considerably less expensive than, say, bronze. On the other hand, natural materials always lose out where monumental art is involved, because no serious weight problems arise with light plastic – in contrast to marble or metal.

The world-famous “Nanas” – colourfully painted sculptures of gigantic, corpulent women by the French artist Niki de Saint Phalle (1930 – 2002) – are unlikely to have spread so far without the weight advantage that polyester gave them either. This was, however, the only reason why Saint Phalle chose plastic: “I am not the slightest bit interested in the concept of plastic in itself or its ‘modern’ character. I paint it and people don’t know what kind of material it is. As far as I am concerned, the material is not important, it is a means to an end”, she admitted candidly (What artists say about plastic…). The fact that the basic substance was polyvinyl acetate in some cases and polyester resin in others also plays a secondary role in the lifelike human sculptures that the US sculptor Duane Hanson (1925 – 1996) created from the late 1960s onwards as representatives of the American way of life with the help of plaster casts. Because the material is always covered by clothing, ink and make-up. Inherent aesthetic qualities of the plastic are not apparent; the material is reduced to pure ‘fitness for purpose’. 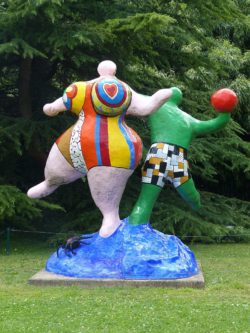 Most artists grapple with the innovative new materials, on the other hand: “Plastics don’t have to look the way we encounter them day in, day out”, says the painter, sculptress and chemist Bussi Buhs, who was born in 1940 and teaches in Munich. “The only people who can prove this are artists who are willing to use their imagination and highlight the as yet still undiscovered sides of these organic materials – which combine in themselves the design potential of all other materials as ‘supermaterials’ that are felt to be colourfully female – by expressing them personally in their work.” What is important is to investigate the specific ways in which plastics articulate themselves and to enable them to “talk” in the work of art. New forms of expression are added to the art portfolio when these treasures are mined.

Artistic autonomy is not surrendered here; the “language” of the plastic is not supposed to dictate the idea behind the work of art. In other words: the choice of material does not determine the artistic concept but vice-versa. The French sculptor César Baldaccini (1921 – 1998) stressed that the design of his “Expansions” made from polyurethane foam was determined by artistic creativity: “Once the process of the chemical reaction has been understood, the body starts to take action: this is physical, involving the hand. There are a thousand different ways to mould in order to produce very different shapes. There is also finishing by means of pressing that strengthens the surface. And I often make substantial changes in shape when I am doing this work. I can cut (up) the foam too and add a piece that has not been moulded yet. I can do whatever I want.”

The pre-eminence of the idea applies to the light sculptures made of plastic created by the above-mentioned German sculptor Uli Pohl too: “It has been written that an object made of acrylic glass is first of all a transparent medium and that it is this transparency which transmits the light and reveals the surroundings. It should be pointed out by way of contrast that the design and the outcome of this are themselves the transport medium for the realisation of Pohl’s plastic ideas. Even his very first trials (‘models’) were not material tests with the aim of finding a possible design; instead of this, they were attempts to implement a specific concept.” (Quoted from the speech given by Dr Siegfried Salzmann [1928 – 1993] at the 1st Triennial for Small Sculptures in 1980, when he was Director of Wilhelm-Lehmbruck-Museum in Duisburg).

Art made from plastic as a reflection of the time

Irrespective of the autonomy of art: plastic is not a neutral material; it has a predetermined cultural and social context. The ideological attributes associated with it are not automatically abandoned as soon as art provides the framework. Plastic is considered to be modern, innovative, progressive – so it is no surprise that artists have associated utopian progress with the material too. US artists in particular have staged plastic: trendy, colourful and polished to a sheen. They have had to accept the criticism for doing this that they have given in to the pressure of the affluent society, since plastic has been considered the fruit and symbol of the focus on consumption and has been attacked for this. It is, however, more likely to be the case that art has merely held a mirror up to the society we live in. Critical responses like these do at any rate make it clear that there is greater pressure to justify the use of plastics as soon as resistance to our economic system starts to grow, as was the case from the end of the 1960s onwards. Synthetic materials were already frowned upon by system critics and environmental activists before the first oil crisis began in 1973.

Interestingly enough, art was not paralysed by the anti-plastic trend; on the contrary, it even took advantage of it: plastic was used specifically to destroy the aura of the work of art, to desacralise it. Plastics were supposed to eliminate the quasi-religious, devotional approach art enthusiasts adopted in museums. The French artist and philosopher Hervé Fischer (born in 1941) went as far as to exhibit the remains of torn-up works of art in plastic sacks. And the Irish sculptor Les Levine (born in 1935) even advocated “disposable art” made from plastic that was supposed to be consumed. We think that goes much too far – both art and plastic are goods that are worth keeping (or at least recycling)

Art and plastic: what artists say about plastic

“Plastic is not a material that I like. It is a material I was forced to use because nothing else was available. It has to be said that this material is the only one in existence today that enables large, transportable volumes to be created: light and unbreakable.”

“What you have to say is more important than the material you use. The material must help to implement the idea. If plastics did not exist, this would not stop me working.”

“Polyurethane – generally called foam plastic – has become the ideal vector for expressing concepts and ideas that correspond to my own attitude towards compression and density. Foam plastic is an interesting and very amusing material that appears to have an instinctive and sexual sense of humour.”

John Angus Chamberlain, born in 1927, US artist (sculpture, film, photography). Representative of “Nouveau Réalisme” and “Abstract Expressionism”. Works with such materials as polyurethane and polymethyl methacrylate

“Plastic is such an obviously modern material that many artists have believed it is enough simply to use plastics in order to update an outdated form of artistic expression and make it interesting. But although it is not capable of replacing a poor idea, this modern feel does exist, particularly when it is expressed technologically.”

“In the final analysis, my work is done within the mechanical limits, the chemical laws of the materials that I use. The beauty that I am looking for is the beauty of simple scientific laws and the control of them by human beings.”

“To create something artistic from plastic, I think it is necessary to consider and really understand the main features of this material, its social application areas and its production potential. The manufacturing process became of greater interest to me than the object produced and I was of the opinion that this process had more to say about society and art than any aesthetic design or any work that an artist could create from it.”

Bussi Buhs, born in 1940, German painter, sculptress and chemist; experiments with plastics from 1961 onwards, establishment and leadership of the plastics workshop at the Academy of Fine Arts in Munich from 1971 to 2005, lecturer for plastics technology. Works with such materials as polyester and acrylic

“I am willing to use any material, any medium to make light directly or indirectly visible. Every material has to be dematerialised, so that the desired effect is achieved. Transparent materials like Plexiglas already have the ability to look immaterial as they are. This is why I used Plexiglas very often in the 60s. I abandoned this material when it was discovered by designers.”

Academy of Fine Arts in Düsseldorf from 1950 to 1953, creative work in the luminokinetic art field since 1956, co-founder of the Düsseldorf group of artists known as “ZERO” in 1957