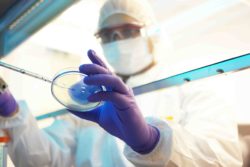 As developments with the coronavirus are currently demonstrating, dangerous pathogens represent a global health and safety risk. In-depth know-how about such pathogens and active pharmaceutical substances is the key to the creation of effective medical drugs and vaccines. Dealing with pathogens and substances that are harmful to health is part of daily routine in hospitals and laboratories. Protective measures need to be taken in order to avoid contamination of and harm to medical and laboratory personnel. Safety cabinets and personal protective equipment are central components of prevention concepts. Such polymer materials as polyacrylic, polyethylene, polyurethane or latex play a tremendously important role in the production of them. k-online visited Berner International GmbH in North Germany, a well-known international manufacturer of safety cabinets and personal protective equipment, to take a look behind the scenes there. Join us as we present a brief summary of the history of the company.

The right “camouflage tactics” are vital not only in secret military operations but also in pharmaceutical and biological laboratories, in which the staff are taught to handle pathogens and substances that are harmful to health. The government specifies the observation of preventive protection measures so that laboratory personnel do not suffer any consequences when, for example, handling dangerous pathogens or cytotoxins, which include such substances as the chemotherapeutic agents used in treating cancer. What are required here are in particular safety cabinets, that permit contamination-free handling in a protected environment. As well as personal protective equipment that is appropriate for the hazard level concerned and consists of such things as respirator masks, goggles, safety clothing and safety gloves, made from a variety of different polymer-based materials, i.e. plastics and rubber. Berner International GmbH is one of the leading suppliers of high-quality personal protective equipment. This company, which is based in Elmshorn, North Germany, develops, designs and manufactures such products as safety cabinets for pharmaceutical and biological applications. 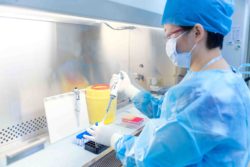 The founder and the man who gave the company its name was the Swede Erling Berner (1912-1993). He was an engineer, owned an insulation material factory established by his father in Gothenburg and devoted his career primarily to cooling, air conditioning and dehumidification technology. In the 1950s, he set up several different companies that worked in this field. His company in the USA focussed on the development and production of what are called air curtains – also known as air doors – which we are familiar with from the entrances to department stores and which were very much in fashion at the time. Put in simple terms, the way an air curtain works can be described as follows:

A laminar, i.e. steady, flow of air with no turbulence is blown down vertically from the ceiling. On both sides of the flow of air, a boundary layer forms that – in line with a physical principle – prevents the kind of natural exchange of air and heat that takes the form of a draught when a window is open and there is a difference in temperature. A sort of lock is created that can be breached actively but stops the exchange of air in this context. In cold storage warehouses, for instance, air curtain doors are used to make it possible to move openly between warm and cold areas – without any significant loss of heated or cold air.

Production of chemotherapeutic agents in a protected atmosphere

The idea of making economic use of air was reflected in the name of the company that Erling Berner founded in Hamburg in 1980: the name “Berner Air Economy GmbH” was, however, changed to the name that is still used today (“Berner International GmbH”) only two years later, presumably to take account of the fact that not only energy can be saved with laminar air flow: because air curtains also stop airborne dust, volatile contaminants or germs from entering hygienically sensitive areas. Berner Air Economy GmbH had already installed numerous air circulation units in hospitals.

In the early 1980s, the trade associations representing the insurance industry complained that the way chemotherapeutic agents were manufactured was a risk to laboratory personnel. They warned that gloves alone did not stop laboratory staff from coming into contact with cytotoxic substances in the air. At the time, chemotherapeutic agents were made under more or less unprotected conditions, openly on laboratory benches. More and more insistent calls were made for greater occupational health and safety.

Jürgen Eckert, a pioneering engineer who was a Berner executive at the time, was quick to see how the company could take advantage of its expertise to satisfy the requirements made by the trade associations, which were in the meantime working on a safety standard for the production of chemotherapeutic agents. The solution was, very simply, to relocate the manufacturing process from the laboratory bench to a protected room, comparable to those in which it was common practice to handle pathogens. The basic idea was to make sure in this way that toxic active substances do not endanger people or the environment, while no extraneous substances from the ambient air contaminate the pharmaceutical.

Although this solution pointed in the right direction, it had a downside: pathogens that contaminate a safety cabinet can be killed with suitable disinfectants. Toxic medical drugs like chemotherapeutic agents, on the other hand, cannot be neutralised. They have to be collected meticulously for subsequent disposal in accordance with safety regulations. A safety cabinet for the production of chemotherapeutic agents therefore had to be designed in such a way that contaminants released can be extracted and filtered out effectively. Which means that suitable air flow, an efficient filtering system and the ability to change full and blocked filters without any danger and contamination were needed. Child’s play for the Berner specialists: the company knew all about filters and air flows.

Company makes a breakthrough with the “Berner-Box” 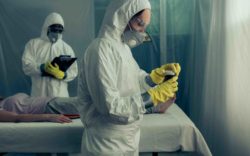 In 1985, after only three years of research and development, Berner presented the first generation of its chemotherapeutic agent cabinet (MB model) to the industry and created the basis for the current success enjoyed by the company as a result. This original safety cabinet was more like an ingeniously designed box (which explains why it was called the “Berner-Box”), that was illuminated on the inside and had a pane of glass at the front. The user put his gloved hands into the box through two round holes at the bottom of the pane of acrylic. A laminar airflow, which blew vertically downwards over the pane from the top, extracted dangerous aerosols and dust from inside the box and transported them towards a filtering system via suction facilities in the base of the box.

The Berner-Box, which was tested by the work safety association and was certified in accordance with German equipment safety legislation, was an occupational health and safety device that was exactly what the market was looking for. Berner’s commitment paid off – on a sustained basis: feedback from customers had the effect that Berner was able to customise its safety cabinet to meet the requirements of potential users more and more effectively. It was possible to increase not only safety but also comfort in this way. The company management prioritised the development of equipment and materials, with which pharmaceutical residue could be collected and disposed of safely. And Berner added personal protective equipment to the product range and was as a result in an increasingly good position to operate as a one-stop supplier of comprehensive laboratory safety solutions.

Jürgen Eckert, who had been promoted to director in 1988 and was, for a short time, co-owner of Berner International GmbH, before he became sole owner, had helped the company through what was initially a difficult phase. Thanks to the Berner-Box, the company became not only a proficient partner that concentrated on supplying safety cabinets for pharmaceutical applications but also an expert that was taken seriously by the standards committee. At the end of the 1990s, Berner launched the third generation of TÜV-tested and -certified safety cabinets for chemotherapeutic agents on the market, which were already among the best that the market had to offer as far as workmanship, air flow and multi-stage filtering technology were concerned. The company obtained DIN EN ISO 9001 certification and added further areas of expertise by taking over another company. The technical customer service that Jürgen Eckert had already established at the company in the 1980s was expanded and decentralised to be located closer to the customers. 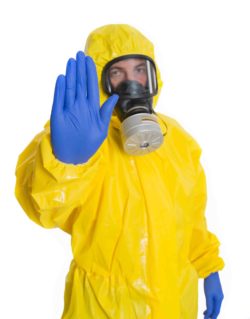 The growth strategy that Berner had followed since the mid-1980s meant that the company reached its capacity limits towards the end of the 1990s. It was time to extend the production facilities and the office building that the company had bought and moved into in Elmshorn in 1988. Berner needed space to continue its expansion in the new millennium.

Jürgen Eckert took a major decision as early as 2000 when he appointed Thomas Hinrichs as a director of the company. They knew each other from Hinrichs’ job at TÜV: Hinrichs was a medical engineering graduate who was an expert for safety cabinets, which he tested thoroughly in laboratories all over the world. Thomas Hinrichs knew his stuff and was familiar with all the relevant standard issues and testing principles. And he was aware of the requirements that users and authorities made on safety cabinets, so he also knew the expectation that manufacturers like Berner should be able to provide added value to customers.

Thomas Hinrichs proved to be the man of the moment, concentrating on the ongoing development of the safety cabinets that Berner produced for biological applications too from 2005 onwards. He expanded the business with personal protective equipment and developed new tools for users, such as special emergency and cleaning sets. Hinrichs’ goal was to take the company to the top as a manufacturer of premium products for the industry. What this meant for him was, among other things, to expand the company’s in-house research and development operations, to increase co-operation with scientific institutions and users and to establish company test laboratories like the one in the USA, in order to be able to test products, methods and processes under authentic conditions and simulate emergency scenarios – and to have users trained in the proper use of their personal protective equipment under the instruction of experts.

In order to be able to implement the many projects he was planning, Thomas Hinrichs pushed for further personnel on the commercial side and recruited Malte Schneider, a business administration graduate with corporate experience and a desire to have an opportunity to prove himself at the entrepreneurial level. Division of labour is essential nowadays, in order to focus more effectively on the different areas that require attention, such as the establishment of the Lab Excellence Academy (LEAC), Berner’s training centre for users and partners, which has been opened in Hamburg. The company is young and there is plenty to do. Thomas Hinrichs and Malte Schneider now liaise to discuss which assignments are to be given priority – as managing partners of Berner International GmbH. When Jürgen Eckert saw that the two directors were doing their job well and were also willing to adopt new approaches, he sold the two of them his shares in the company and retired. He maintains close contact with Thomas Hinrichs, because the two of them were not just colleagues: Jürgen Eckert is Thomas Hinrichs’ father-in-law as well …