Transistors in computer chips work electrically, but data can be transmitted more quickly by using light. For this reason, researchers have long been looking for a way to integrate lasers directly in silicon chips. Scientists from Forschungszentrum Jülich have now come a step closer to achieving this. Together with researchers from Centre de Nanosciences et de Nanotechnologies (C2N) in Paris and the French company STMicroelectronics as well as CEA-LETI Grenoble, they have developed a compatible semiconductor laser made of germanium and tin, whose efficiency is comparable with conventional GaAs semiconductor lasers on Si. (Nature Photonics, DOI: 10.1038/s41566-020-0601-5)

Optical data transfer permits much higher data rates and ranges than current electronic processes while also using less energy. Computation and data centres, therefore, already default to optical fiber whenever cables exceed a length of about one metre. In future, optic solutions will be in demand for shorter and shorter distances due to increasing requirements, for example board to board or chip to chip data transfer. This applies particularly to artificial intelligence (AI) systems where large data volumes must be transferred within a large network in order to train the chip and the algorithms.

Image: Scanning electron microscopy images: The germanium-tin layer is only a few micrometres thick and is applied to a "stressor layer" made of silicon nitride and an aluminium base for improved heat dissipation (left) and then coated with silicon nitride (right). Orienting the germanium-tin compound along the wider atomic distances in the crystal lattice of the silicon nitride leads to stresses in the embedded material, which ultimately cause optical amplification. (Copyright: Forschungszentrum Jülich / Nils von den Driesch)

"The most crucial missing component is a cheap laser, which is necessary to achieve high data rates. An electrically pumped laser compatible with the silicon-based CMOS technology would be ideal," explains Prof. Detlev Grützmacher, director at Forschungszentrum Jülich's Peter Grünberg Institute (PGI-9). "Such a laser could then simply be shaped during the chip manufacturing process since the entire chip production is ultimately based on this technology".

But there is one problem: pure silicon is an "indirect semiconductor" and, therefore, unsuitable as a laser material. Different materials are currently used for manufacturing lasers. Generally, III-V compound semiconductors are used instead. "Their crystal lattice, however, has a completely different structure than that of silicon, which is a group IV element. Laser components are currently manufactured externally and must be integrated subsequently, which makes the technology expensive," explains Grützmacher.

In contrast, the new laser can be manufactured during the CMOS production process. It is based on germanium and tin, two group IV elements like silicon. Back in 2015, Jülich researchers showed that laser emission can be obtained in GeSn system. The decisive factor in this is the high tin content: back then, it amounted to 12 %, which is far above the solubility limit of 1 % .

"Pure germanium is, by its nature, an indirect semiconductor like silicon. The high concentration of tin is what turns it into a direct semiconductor for a laser source," explains Dr. Dan Buca, working group leader at Jülich's Peter Grünberg Institute (PGI-9).

Image: In a laser (short for "light amplification by stimulated emission of radiation"), energy is fed into the "active medium" through a pumping process. This pumping process can occur optically through irradiation with light or electrically. The necessary pumping power can vary considerably, depending on the type of laser. The excited electrons are thus excited to a higher, metastable energy level. These states should last as long as possible so that a "population inversion" can be established, in which a large number of atoms or molecules are in a state of excitation. Stimulierte Emission All that is needed now is stimulation by a photon with the energy to be emitted, so that the excited atom falls back into its ground state and in the process sends out a photon with identical energy. This multiplication by 2 of the stimulating photon makes the laser medium act as an amplifier. The newly produced photon, in turn, excites other excited atoms or molecules so that they also emit photons. This leads to the chain reaction that produces laser radiation. Copyright: Forschungszentrum Jülich

The patented epitaxial growth process developed by Jülich is used by several research groups all over the world. By further increasing the tin concentration, lasers have already been made that work not only at low temperatures but also at 0°C.

"A high tin content, however, decreases the laser efficiency. The laser then requires a relatively high pumping power. At 12-14 % tin, we already need 100-300 kW/cm2," explains Nils von den Driesch. "We thus tried to reduce the concentration of tin and compensate this by additionally stressing the material, which considerably improves the optical properties."

For the new laser, the researchers reduced the tin content to approximately 5 % - and simultaneously decreased the necessary pumping power to 0.8 kW/cm2. This produces so little waste heat that this laser is the first group IV semiconductor laser that can be operated not only in a pulsed regime but also in a continuous working regime, i.e. as a "continuous-wave laser". 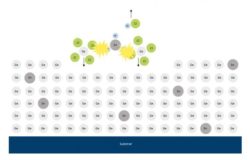 "These values demonstrate that a germanium-tin laser is technologically feasible and that its efficiency matches that of conventional III-V semiconductor lasers grown on Si. This also brings much closer to an electrical pumped laser for industrial-application that works at room temperature," explains institute head Grützmacher. The new laser is currently limited to optical excitation and low temperatures of about -140°C.

Such a laser would be interesting not only for optical data transfer but also for a variety of other applications since there are hardly any cheap alternatives for the corresponding wavelengths in the infrared range of 2-4 μm. Potential applications range from infrared and night-vision systems all the way to gas sensors for monitoring the environment in climate research or even breath gases analyses for medical diagnosis.