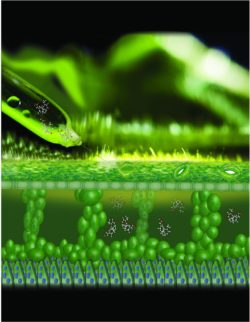 This is a photo and illustration of the function. The ion pump electronically deliver a common stress hormone known as ABA into a tobacco plant. Credit: Thor Balkhed and Miriam Huerta

Research in the Electronic Plants group at the Laboratory of Organic Electronics, Campus Norrköping, follows two main avenues. In one, scientists incorporate electronic circuits into plants, such as roses, in a method of storing energy. In the other, they are seeking ways to influence plant functions with bioelectronic devices aiming, for example, to give plants greater resistance to environmental stress.

"We can implant electronic devices into plants without damaging the plant. This research field is new, but we are starting to be able to influence plant physiology, and we hope that this will become an effective tool to study how plants function, but even find applications in agriculture and forestry", says Eleni Stavrinidou, who leads the research group in Electronic Plants at the Laboratory of Organic Electronics, Linköping University.

Scientists Iwona Bernacka-Wojcik and Miriam Huerta have managed to electronically deliver a common stress hormone known as ABA into a tobacco plant. The plant normally secretes this hormone when subjected to stress, for example, during drought or other extreme weather conditions. A solution containing the hormone is also sometimes sprayed onto plants in shops, to keep them fresh longer.

The researchers showed that after the hormone was delivered it spread through the leaf tissue, and that the small pores, the stomata, on the leaf surface closed, to prevent the release of water. The plant must optimise the opening and closing of the pores because when they are open it carries out photosynthesis, but at the same time it loses water.

"Using the new generation of ion pump, with a capillary form whose diameter is no thicker than a hair, we could electronically deliver ABA molecules into the leaves of tobacco plants without harming the plant. If the moisture remains in the plant, it becomes more resistant to, for example, drought", says Eleni Stavrinidou.

The lack of any damage to the leaf and the plant is an important part of the success, since plants do not repair damaged tissue as animals and humans do. Instead, the plant discards the damaged leaf or branch, and replaces it, in the optimal case, with a new leaf or shoot.

The tiny ion pump was developed a couple of years ago at the Laboratory of Organic Electronics. It consists of an electrode made from a conducting polymer inside a tiny container connected to a channel based on a polymer electrolyte. Ions are led through the thin channel out to exactly the correct position - inside a root fibre or leaf vein of a plant. The container in this case is filled with ABA. When a voltage is applied across the electrodes, one in the container and one external, the charged substance is transported out of the channel into the tissue. The rate of delivery of the substance is directly proportional to the current. Only the active substance is pumped out, nothing else, and there is no return flow to the pump.

"We can give the plant the exact dose it needs, with high precision", Iwona Bernacka-Wojcik says.