By Markus Weber and Guido Deussing

The first completely synthetic fibre started to spread all over the world from the USA in May 1940, processed into women’s stockings. What we are talking about here is polyhexamethylene adipic acid amide, which is better known as nylon. What many people are not aware of: the innovative new artificial fibre had already completed its baptism by fire long before then. The manufacturer Du Pont launched the pioneering product on the market as early as 24. February 1938 – in the form of a toothbrush with bristles made of nylon. This happened 75 years ago now. A good reason to look back at the first nylon toothbrushes and to draw attention to the lengthy research work that preceded the invention of nylon by the US chemist Wallace Hume Carothers (1896-1937). 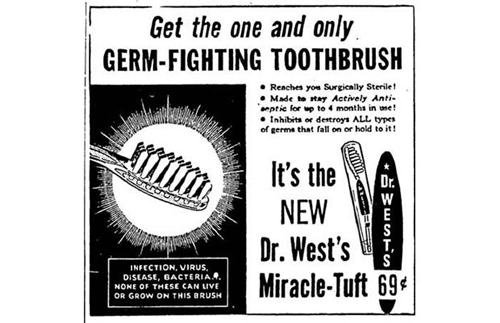 Nylons – ultrathin stockings made from “coal, water and air” – are what people all over the world immediately associate nowadays with nylon, the first completely synthetic fibre that was developed in the laboratories of the huge chemical company Du Pont de Nemours & Co. in the 1930s. Although nylon stockings are impressively transparent, their dominance of the market nevertheless conceals the fact that a much less spectacular nylon product was launched on the market beforehand: the nylon toothbrush. This product already went on sale on 24. February 1938, a good two years before the highly popular stockings. In these toothbrushes, nylon bristles replaced bristles of natural origin – generally wild boar bristles – (see “A brief history of the toothbrush”), which dry off less effectively and in the moist environment of which bacteria and fungi flourish. Another advantage: using nylon lowered the price of toothbrushes and created a mass market for them as a result. In this form, they were introduced on the US market under the name “Doctor West’s Miracle Tuft Toothbrush”.

Although this was genuine progress, demand for them was poor – for several reasons:

• First-generation nylon bristles were so hard that there was a danger of them injuring the gums and making them bleed; they were not recommended by dentists for this reason. This did not change until softer nylon became available: Du Post introduced the “Park Avenue Toothbrush” in 1950.
• At the time, it was not yet everyday routine to use a toothbrush; dental hygiene did not enjoy particularly high priority. Attitudes only started to change after 1945, thanks – among other things – to the US soldiers returning from the war who spread the word about the need to clean one’s teeth on a daily basis and thus helped nylon toothbrushes to become highly popular.

Du Pont is still in the nylon toothbrush business to this day. The standard nylon fibre that was introduced in 1938 is still in the company’s range (“Tynex Classic” toothbrush), but there are plenty of different alternatives to it in the meantime: specially finished bristles, a brush-like surface or antimicrobial additives diversify the cleaning capabilities of the “Tynex” product line (see www2.dupont.com) that Du Pont established in the 1950s.

Most of the toothbrush bristles in common use today are made from nylon 612. This material is said to combine “excellent resilience and elasticity with high wet strength”, i.e. ideal properties for the bristles of toothbrushes (source: Evonik Industries, www.vestamid.de). Nylon 610 is used occasionally too, e.g. in the “Herox” toothbrush supplied by Du Post. These modern nylon materials can be traced back to polyamide 66, which was developed by Wallace Hume Carothers in 1935 and was supplemented at almost exactly the same time by polyamide 6 – that was developed by the chemist Paul Schlack (1897–1987) at the Aceta plant operated by I-G. Farben in Berlin-Lichtenberg.

In order to understand what these confusing numbers mean, we need to stop here for a short lesson in chemistry – focussing on what is known as condensation polymerisation:

• An acid and an alkaline molecule have to be combined in nylon production. Chemists use a two-stage process to make this combination: first of all, the molecules of the two basic substances are amalgamated to from the molecule of an organic salt; the salt is then heated up to more than 260°C in a vacuum. The result is the creation of a new, condensed molecule that contains all the original atoms – with the exception of two hydrogen atoms and one oxygen atom. In other words: water (H20) is split off in condensation polymerisation. What is left is a unit that is called amide; it combines with others of its kind to form the long nylon polymer (“giant molecule”), a chain of about 1,700 atoms. It is, of course, only possible to determine under special microscopes that the nylon macromolecule is one of the biggest high polymers – “giant” in this context means a length of 0.0000021 millimetres ...
• Carothers used hexamethylenediamine and adipic acid, which are obtained from benzene and phenol. Since each of the two raw materials has six carbon atoms, the product was called “polyamide 66” (C12H22O2N2, later given the name of nylon).
• Schlack experimented with just one raw material, in which – however –both the amine and the acid component were present: he used caprolactam, an amide of aminocaproic acid. The white powder polymerised after Schlack melted it in a thick-walled glass tube and left it overnight in an oven at 230-250°C: the molecule rings opened and joined together to form high-molecular chains by the head-to-tail principle. Since aminocaproic acid has six carbon atoms, the single-component polymer was called “polyamide 6” (C6H11, later given the name of Perlon).
• The condensation polymerisation product of 1,6 hexamethylenediamine and 1,12 dodecanoic acid is known as nylon 612 – because of the six carbon atoms in the amine part and the twelve carbon atoms in the acid part.

The vision of a completely synthetic fibre – which was just as ambitious as its outcome was uncertain – that Wallace Hume Carothers started to try and implement in 1928 as head of the Du Pont basic research operations in Wilmington/Delaware marked the beginning of the nylon story. Seven years were to pass before the “superpolymer” was found and developed to the stage where products made from it were viable – helped on occasions by chance discoveries. This does not mean that nylon is a product that was developed by accident, however, because the aim of the experimental work was clear right from the start.

An initial breakthrough was made as early as 1930: Julian Hill, Carothers’ first assistant, produced a thick syrup in the course of condensation polymerisation tests. When he took the glass stick with which he had been stirring out of the beaker, there were thick threads hanging off it. Instead of breaking or dripping off, these threads congealed as they cooled and allowed themselves to be pulled apart like rubber; when they were released again, they did not retract. Although this unintended by-product of Carothers’ basic research could not be used for industrial purposes, partly because of its low melting point, Carothers and Hill still presented their discovery to the scientific community, because they claimed to have proved that it must be possible to develop viable fibres from purely synthetic materials. Hill’s thread from the Du Pont laboratory was considered to be the first completely synthetic fibre in the world from then on.

In the following years, no end of different chemical combinations were tested at the Du Pont laboratory and hundreds of different fibres were manufactured, all of which turned out to be unsatisfactory, however. The work produced results even so, because Carothers created the basis for the polymerisation of chloroprene into neoprene, one of the more common synthetic rubbers (see our Topic of the Month for January 2013) in the context of his ongoing fibre research and developed synthetic musk that was sold to the perfume industry. On 23. April 1934, Carothers’ assistant Donald Coffman, a chemist at Illinois University, finally succeeded in manufacturing a “superpolyamide” that was both rugged and easy to process. The formulation was so expensive, however, that a search for an affordable alternative soon began. On 27. April 1934, Wesley Peterson synthesised a polyamide that was called “polymer 510” because of the five carbon atoms in its ammonia part and the ten carbon atoms in its acid part. Carothers thought that he had reached his objective, but the Du Pont management were not enthusiastic, because the list of ingredients included castor oil. At the time, oil that was made from the tropical castor seed was a cheap product which was only used as a laxative that tasted terrible. The Du Pont strategists were afraid that using castor oil to produce polyamide would increase demand for and thus the market price of castor seeds to such an extent that business with the new synthetic fibre was likely to become unprofitable within a very short time. Carothers’ team was therefore sent back to the laboratory.

After further months of systematic experimentation, Gérard Berchet, who was recruited from Colorado University, finally succeeded in producing “polymer 66” from hexamethylenediamine and adipic acid on 28. February 1935. Carothers thought that it did not match the quality of “polymer 5-10” and needed further work done on it. Although it resisted the solvents used in dry cleaning, its melting point of 265°C was rather high and made it difficult to process the material. More than 200 technical experts were subsequently involved in optimisation of “fibre 66” for the melt spinning process. Initially, every individual production operation caused the engineers new problems – and helped them to become increasingly familiar with what they described as a temperamental fibre. Whereas it was only possible to spin it for ten minutes at a time in the early stages, this was already increased to 82 hours by 1937. Once the first batch had finally been produced in-house in the “experimental station” and “fibre 66” had been given the new name of “nylon” (see “How nylon got its name”), Du Pont built a special nylon factory in Seaford/Delaware at a cost of USD 8.5 million. This little town, which had 2,800 inhabitants at the time, then took the bold decision to call itself the “nylon capital of the world” in future.

The original patents for nylon, which were granted in 1937, stressed the following characteristics as the special properties of the “new synthetic silk”: it was said to be both stronger and more elastic than natural silk, while it could be stretched to up to 700 per cent of its original dimensions and still return to its former state. The German chemist Hermann Staudinger (1881-1965), the man who developed the macromolecule theory and thus the field of high-polymer chemistry, wrote in 1939: “These nylon fibres demonstrate surprisingly impressive tear strength, elasticity and flex cracking resistance, so that they have better physical properties than natural fibres, wool and silk in this respect. Major technical success has therefore been achieved in this area via the systematic application of a fundamental, scientifically underpinned theory. Entirely new approaches are opening up for fibre production as a result. It is probable that fibres with different and more valuable properties than natural fibres will be manufactured in future on the basis of an in-depth understanding of the structures involved.”

The fact that the public immediately accepted nylon, so that there was very strong demand for it, improved the image of plastics in general. In the past, the man on the street had been sceptical about synthetic materials and basically considered them to be a cheap substitute for natural materials. Following the development of nylon, people were willing to acknowledge plastics as materials that were at least as good and often superior to conventional materials due to their advantages. So it is no surprise that worldwide production of polyamide 66 has increased fifty-seven thousand times over since 1938, the year in which the marketing of nylon toothbrushes began – from a modest 45.4 tonnes to 2,600,000 tonnes.