Anathema to the nostalgic, but a purchase that lasts a lifetime all the same 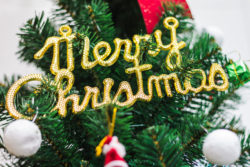 A Christmas tree that neither prickles nor loses its needles? That is so easy to look after that it doesn’t even need water and still has all its foliage in January even so? This is not wishful thinking but reality – although the tree we are talking about is not natural. Because it is not found in a forest; it is made synthetically. In the USA, every third Christmas tree is already made of plastic, because they have many advantages over their natural prototype. They are not really trendy over here in Germany yet, but they do account for about ten per cent of the market. Synthetic Christmas trees generally spend their lives in the background, however, tending to be found as decoration on balconies or patios rather than in living rooms.

According to the German association of forest owners, about 28 million trees are felled each year so that Germans can enjoy their Christmas. Switching to synthetic alternatives would make it unnecessary to saw down all these trees. Although synthetic trees are “dead” right from the start, they do at the same time “live” longer, i.e. they are more durable and are reusable. A strong argument for sustainability enthusiasts, because transporting trees from the forest to the distributor to the customer every year – and the CO2 emissions associated with this – are eliminated as a result. However: four of every five plastic trees are imported from China; so that the CO2 balance is positive, the magazine “Geo” has worked out that they have to last at least ten Christmases.

The life cycle analysis is also impacted by the disposal problem: whereas synthetic trees used to be produced from such natural materials as feathers or bristles, they are manufactured nowadays from metal, fibre glass or plastic. Most of them – around 80 per cent – are made of polyvinyl chloride (PVC), a material that hardly rots at all, as is generally known. And once synthetic Christmas trees have come to the end of their useful life, they are not recycled; they end up in refuse incineration plants instead – and what is left of them is not humus but such substances as hydrogen chloride gas (reacts with water or atmospheric humidity to form hydrochloric acid), highly toxic dioxin and carcinogenic benzo(a)pyrene.

Talking about incineration: plastic trees are less flammable than natural conifers. This is an advantage, when real candles are used to light up the tree at Christmas: if they singe a branch, the whole of the tree does not immediately go up in flames. Plastic trees are pleasing to the eye too: they “grow” to be perfectly upright, some even have pine cones and look deceptively genuine and merely feel “plastic”. It is not to everyone’s taste that one has to do without the fragrant pine aroma. Synthetic Christmas trees do not produce any resin, on the other hand – something that people who suffer from allergies will appreciate. They do not attract insects either, whereas natural trees (particularly blue spruces and various kinds of fir trees) can be attacked by Sitka lice.

Plastic trees avoid problems with other members of the animal kingdom too, because none of them hibernate in their branches. This is not a joke: Kirsten Coulson from Wootton Bassett west of London had an unpleasant surprise at Christmas in 2000, when she reached into her (natural) Christmas tree and was bitten by two young adders that were hibernating there. The 30-year-old Englishwoman vowed: “All my Christmas trees will be made of plastic in future”.

Plastic trees are not cheap to buy, but they pay for themselves over the years. A plastic fir tree that is two metres tall can easily cost around EUR 200, including a metal stand. Smaller ones are available for prices starting as low as EUR 59 (no guarantee is given with respect to these prices). All that needs to be done to put up such a Christmas tree is to unpack it, unfold it and make a few adjustments! Anyone who finds it tedious to decorate the tree too, can buy a synthetic tree that is already decorated with strings of lights, balls and bows. There are even trees with artificial snow on the branches. Which does not melt either, even when one spends Christmas Eve on the Costa del Sol or Copacabana with a folding tree. Christmas at temperatures of 30°C in the shade takes some getting used to, however, and would make Christmas carols with very different texts appropriate, like “I’m dreaming of a cold Christmas” or “Sweat pours profusely at night” … (Guido Deußing)

We cordially thank you for your partnership and your trust. To you and those near and dear to you, we extend our warmest wishes for a peaceful holiday season and a Happy and prosperous New Year in good health and good spirits.