A new sensor for light, heat and touch 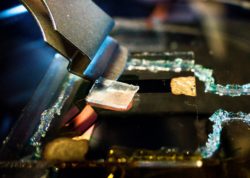 The sensor that can measure changes in body temperature, and react to both sunlight and warm touch. Credit: Thor Balkhed

Inspired by the behaviour of natural skin, researchers at the Laboratory of Organic Electronics, Linkoping University, have developed a sensor that will be suitable for use with electronic skin. It can measure changes in body temperature, and react to both sunlight and warm touch.

Robotics, prostheses that react to touch, and health monitoring are three fields in which scientists globally are working to develop electronic skin. They want such skin to be flexible and to possess some form of sensitivity. Researchers at the Laboratory of Organic Electronics at Linköping University have now taken steps towards such a system by combining several physical phenomena and materials. The result is a sensor that, similar to human skin, can sense temperature variation that originates from the touch of a warm object, as well as the heat from solar radiation.

"We have been inspired by nature and its methods of sensing heat and radiation", says Mina Shiran Chaharsoughi, doctoral student in the Organic Photonics and Nano-optics group at the Laboratory of Organic Electronics.

Together with colleagues she has developed a sensor that combines pyroelectric and thermoelectric effects with a nano-optical phenomenon.

A voltage arises in pyroelectric materials when they are heated or cooled. It is the change in temperature that gives a signal, which is rapid and strong, but that decays almost as rapidly.

In thermoelectric materials, in contrast, a voltage arises when the material has one cold and one hot side. The signal here arises slowly, and some time must pass before it can be measured. The heat may arise from a warm touch or from the sun; all that is required is that one side is colder than the other.

"We wanted to enjoy the best of both worlds, so we combined a pyroelectric polymer with a thermoelectric gel developed in a previous project by Dan Zhao, Simone Fabiano and other colleagues at the Laboratory of Organic Electronics. The combination gives a rapid and strong signal that lasts as long as the stimulus is present", says Magnus Jonsson, leader of the Organic Photonics and Nano-optics group.

Furthermore, it turned out that the two materials interact in a way that reinforces the signal.

"Plasmons arise when light interacts with nanoparticles of metals such as gold and silver. The incident light causes the electrons in the particles to oscillate in unison, which forms the plasmon. This phenomenon provides the nanostructures with extraordinary optical properties, such as high scattering and high absorption", Magnus Jonsson explains.

In previous work, he and his co-workers have shown that a gold electrode that has been perforated with nanoholes absorbs light efficiently with the aid of plasmons. The absorbed light is subsequently converted to heat. With such an electrode, a thin gold film with nanoholes, on the side that faces the sun, the sensor can also convert visible light rapidly to a stable signal.

As an added bonus, the sensor is also pressure-sensitive. "A signal arises when we press the sensor with a finger, but not when we subject it to the same pressure with a piece of plastic. It reacts to the heat of the hand", says Magnus Jonsson.